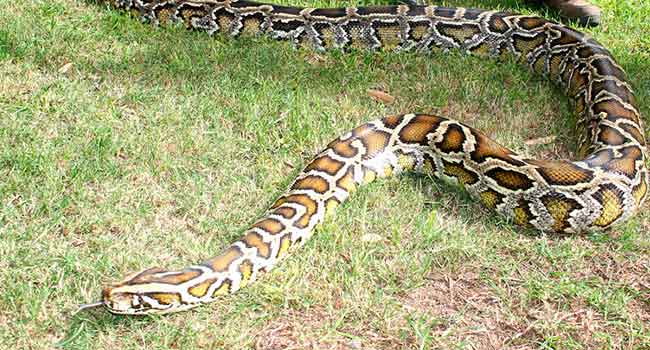 Burmese Pythons are typically found in Asia along the southern part of the continent. These amazing creatures are known for growing up to 19 feet long and squeezing their prey to death. Over the past few years though, Burmese pythons have begun to appear in the Florida Everglades and Everglades Weston. Not even the Burmese Pythons could resist the tropical temperature and the greenery of Florida.

There was a series of studies conducted as to how or why Burmese pythons were slowly but surely taking over Everglades Weston. Some may say that having such a marvelous species call the Everglades their home has affected the national parks food chain. As any native to the Everglades will tell you, the population of rabbits in the Everglades has decreased and studies believe it is because of this remarkable snake species. Consequently, some have begun to question, “Have these pythons taken a toll on the ecological balance in the Glades?”

The Burmese python can go months without eating and can disappear at will.

Some believe that these Burmese pythons arrived to the Everglades after hurricane Andrew hit. One thing we must mention though, although this particular snake is huge in size and intimidating to say the least, these snakes possess very little threat to us humans. Majority of scientists will agree that a Burmese Python will never attack unless provoked.

You would think that because Burmese Pythons have spread out throughout the Everglades that they would be easy to spot. But that is not the case at all. These marvelous creatures are actually hard t find, making it difficult for those who are against their existence in Everglades Weston to hunt them down.

• Crocodiles favor and adapts to living in salt water while an alligator favors fresh water.

Now that you know how these animals differ do you think you would be successful in telling them apart if you were to spot one? Next time you vist the Everglades or the local zoo, try to take notes and see which is which.