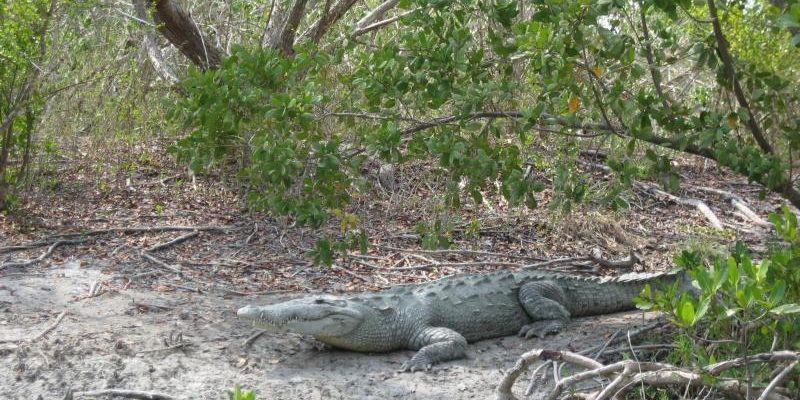 Crocodile Numbers in the Florida Everglades are Increasing

Recent research performed by University of Florida professor Frank J. Mazzotti indicates that the endangered crocodile’s numbers are up. Monitoring that has been performed since the 1970’s, when the crocodiles were declared endangered, suggests a positive outlook for the species’ continued recovery and growth in the area.

The greatest number of crocodile sightings were noted between Card Sound Road and U.S. 1 at the extreme southern verge of the Everglades, in key crocodile estuary habitat. Researchers discovered that while natural nesting sites have declined, the human-altered environment sometimes provided alternative nesting sites for crocodiles. Crocodiles were found attempting to form nests in Biscayne Bay in a private golf course. It seems that despite the loss of natural habitat, human-created nesting sites have compensated for the loss of wild habitat for these animals.

WFLA Florida, reports that a record number of crocodile hatchlings were counted and reported in the Everglades this year. 962 hatchlings were caught, almost double the number caught in 2013. In 2007, the crocodile was re-classified as threatened.

While the numbers of crocodiles found to create an optimistic outlook for the future, effective ecosystem management must be continued if we want to see the species’ success.

In general, scientists continue to urge policymakers to increase the freshwater flows into the estuaries where crocodiles live, mate, and nest. Human water needs often dictate how much water reaches these estuaries, so continued land and water management will be key to ensuring that crocodiles continue to live in the region for generations to come.

Furthermore, the timing of the flows and location of the flow is also crucial to ensuring that crocodiles have the water they need. The human impact creates a complex series of challenges to maintaining the habitat of the Everglades.

The paper suggested that water release into the Everglades would be more effective if it was channeled through mangrove forests rather than through the canal system as it is typically released. Human release of water would also have to mimic the natural dry and wet season cycle, with water released even in the dry January and December months.

The Everglades is a unique ecosystem in that it is the only area in the United States where crocodiles and alligators live side by side. While the Everglades’ alligator population is generally healthy throughout the Florida Everglades, the American crocodile has not enjoyed the same level of success.

The American crocodile makes its home in Mexico, Central and South America, the Caribbean, and the extreme verge of South Florida. The species was added to the endangered species list in 1975. The animal faces threats from changes to freshwater flow into the estuaries in which it makes its home. Due to the increased level of human impact on the Everglades through the use of canals and water-flow control, the American crocodile, which is sensitive to freshwater flow, has been a struggling species in the area.

The University of Florida Website, The Croc Docs, explains that, because the crocodile is so sensitive to freshwater flow, the animals’ numbers and continued presence in the area acts as an indicator of the overall health of the Everglades.

Long-term monitoring of the crocodiles allows scientists to assess the overall health of the Everglades and is a key component of the Comprehensive Everglades Restoration Plan.

Scientists note that as the crocodile numbers increase, their encounters with humans may also increase. Currently, the animals are frequently reported in the Biscayne Bay region and are removed when reported. Scientists urge for increased monitoring and education programs for residents, as the removal of the animals from this habitat could threaten their continued ability to flourish.

The increased presence of crocodiles in the region affords new eco-tourism opportunities for visitors and locals alike. Individuals curious to see wild crocodiles will have a greater chance of encountering these important and majestic animals in the wild. Go on one of our Swamp Boat Tours Florida to see the crocs!