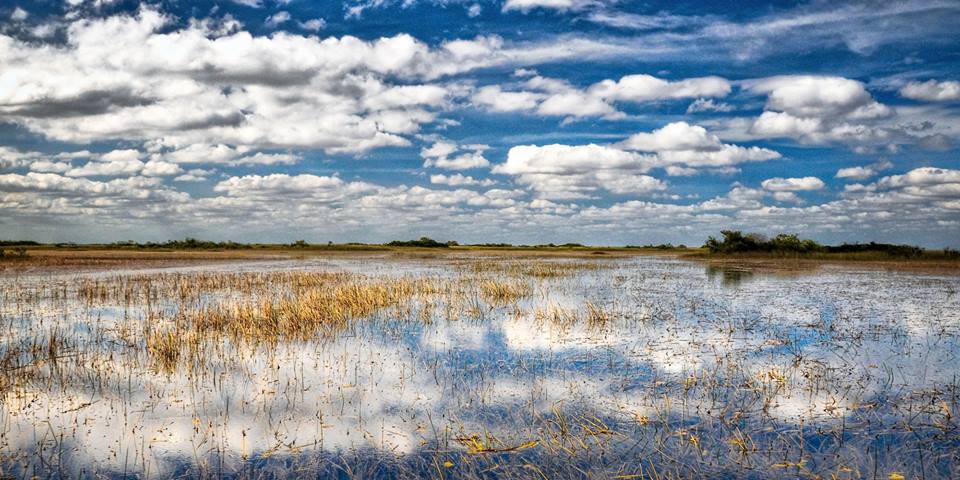 The varied habitats of the Everglades enable a large number of diverse plants and animals to survive. While populations have decreased drastically, the Everglades is still home to a wide range of species. This section will explore some of the different species found in the Everglades today.

Alligators live primarily in fresh water, although they will occasionally venture into the brackish water for short periods of time. At an average length between 13 and 15 feet, alligators have the strength and speed to prey on most land mammals in the Everglades but usually feed on small mammals, fish, birds, and reptiles. Alligators live primarily in marshes and sloughs, where they are vital to the ecosystem because of the “gator” holes they create when they dig into the marsh soil. These holes usually retain water during the dry season, providing a habitat for many animals when water is scarce. Alligators lay between 20 and 50 eggs at a time in nests found above water on the shores of marshes and sloughs. Mother alligators stay near the nest to protect the incubating eggs, and once hatched, usually protect the pod of juvenile alligators for up to a year. Alligators hibernate during winter, decreasing activity in temperatures under 80°F and ceasing to feed entirely at less than 73°F. The American alligator was once hunted and threatened but has recovered due to closely monitored conservation efforts. The American alligator is closely related to two other species found in the Everglades, the American crocodile, and the non-native caiman. Alligators can usually be identified by their broad, rounded snouts.

The Florida panther ranged over the entire southeastern United States approximately 1500 years ago but because of human hunting and habitat destruction, they now only inhabit the Everglades. The current wild population is estimated to be between 80 to 100 adults, classifying the Florida panther as a critically endangered species. The panther is a carnivore, feeding on white-tailed deer, wild hogs, raccoons, and armadillos. They prefer to live on the ground in hammocks, pinelands, hardwood swamps, cypress swamps, and occasionally prairies and freshwater marshes. The female panther will give birth to one to four cubs per litter, which they raise without help from male panthers. The cubs typically stay with the mother for less than two years. Panthers can live up to 12 years in the wild, and usually, die from health issues such as rabies and congenital heart defects, or are killed by other panthers. Most panthers are approximately two feet high at the shoulder and six to seven feet in length. Adult males weigh between 100 and 150 pounds. Females are smaller, weighing between 65 and 100 pounds. Both males and females are born with black spots which fade to a reddish-tan coat in adulthood.

The wood stork, the only common stork in the United States, is an endangered species native to wetland communities. Unlike many wading birds, wood storks hunt by touch rather than sight, dipping their beaks into the water and feeling for prey. Since this technique requires a large amount of prey in a small area, wood storks usually begin to die off early and quickly when wetlands are in danger or destroyed. As a result, they are considered a key species to watch when monitoring wetland conservation. Approximately 1000 nesting pairs have been reported in the Everglades, up from the 100 nesting pairs reported in the 1980s. Wood storks are large, between two and a half to four feet tall with a five-foot wingspan. Adult birds are white with dark, green or purple-tinged feathers on their tails and wing tips. Everglades wood storks begin breeding in November and build nests over water in cypress swamps, mangrove forests, or on islands. The nests are usually placed over standing water to deter predators from eating the eggs or young chicks. Both males and females raise the chicks. Although wood storks can be found in wetlands throughout the southeast coast of the United States, the population is concentrated in the Everglades. 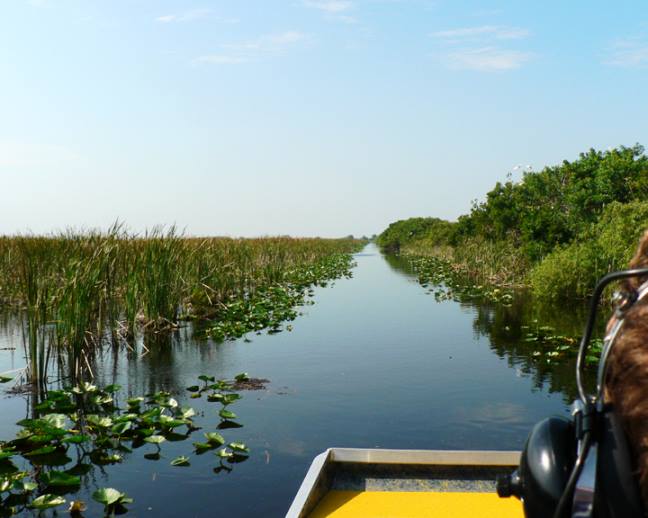 Manatees are marine mammals that can be found in fresh, brackish and salty waters on the coast of the southeastern United States. They tend to inhabit Florida waters, but may range as far west as Texas and as far north as Virginia in warm summer months. Manatees are unusual because they have no natural predators. They are herbivores and may eat up to fifteen times their body weight in vegetation in one day. Male manatees average 9.8 feet in length, weigh up to 1,200 pounds and are believed to live up to 60 years in the wild. Unfortunately, due to threats from humans such as motorboat strikes, and natural threats such as red tide, most manatees in the wild die between 0 – 10 years of age and few live past 30 years. Manatees usually bear just one calf per birth, although twins are possible. The gestation period is approximately one year and mothers care for calves for about two years. In the Everglades, manatees are most commonly found in mangrove swamps and the Florida Bay.

With water all around, you can zip into the waters with our high-speed airboats and actually ride the wind. The airboats we use for our Everglades Airboat tours use state of the art technology and are highly reliable and adventurous at the same time. What’s more! To add to your experience, our Everglades Airboats are equipped with dual control so that you can drive the airboat yourself! Riding through the waters on and Everglades Airboat is one of a kind experience. The thrill that you feel cannot be matched and that is one reason we call ourselves “Ride the Wind”. 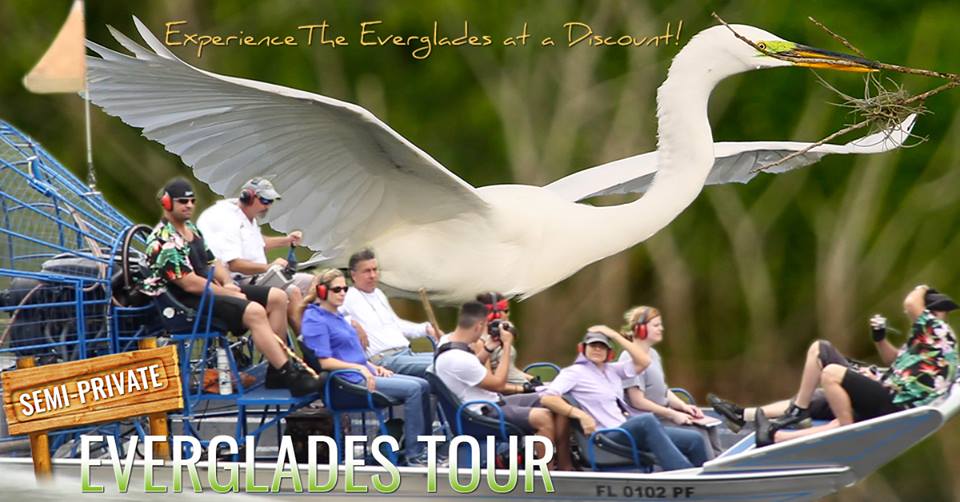 We provide completely private Everglades airboat rides. These private airboat tours start from Weston and are called Fort Lauderdale Private Airboat Rides. This exploratory tour takes you through the most natural and interesting areas. You get to see several exotic animals such as the alligators on the Everglades tour. On your private airboat tour, you can ride the airboat yourself anytime you wish and steer into the unexplored areas of Everglades.
Our private Everglades tour is of three different durations; One-hour, two-hours and three hours. On this tour, we cover a distance of thirty-six miles. On this ride, you will get to have a close look at the wildlife that lives in the Everglades waters. One major benefit of the private Everglades airboat tours is that you can stop anywhere to take a closer look at something that you find interesting. This freedom is not available on tours offered by others.

We also offer a semi-private Everglades airboat tours for those who do not want to spend much. Our semi-private airboat tours are also one of the best in Florida. In the two hour tour, you ride with a couple of other people and get to experience the natural wildlife and the famous alligators of Everglades. On the airboat tour, you will be guided by one of our experienced airboat pilots who will ensure your safety. The pilots are fluent in both English and Spanish and you will have no problem communicating with them. Our Everglades airboats from Miami depart every thirty minutes. You can enjoy the Everglades in every thirty minutes on all seven days of the week!

What They Have To Say

Those who take the Everglades airboat ride with us once come back again for the experience and thrill and recommend us to their friends. This is what they have to say about us:
“It was an exhilarating and enthralling experience. I have never seen anything like this before. Captain Randy is amazing and guided us all the way on the tour. My kids were so excited to see the alligators.” -Annie
“We took the Private Everglades Tour and it was worth every penny. Captain Randy was super cooperative and we stopped at several placed to take pictures. The ride was for two-hours but it was so much fun that we wished it last longer” -Hannah
“The ride was all good but my favorite part was when I got to ride the airboat myself. It was so thrilling to speed into the water on the airboat. It was something I had not experienced before. I would definitely go again only to ride the airboat once more.” -Jake
“My friends and I went for the private tour. We took a pack of beer and enjoyed the ride on a bright sunny day. Captain Randy is a fun person. He guided us throughout the tour. Great experience.” -William

To enjoy our Ride-the-wind Everglades Airboat Tours, you can find us at 1006 U.S. 27
Weston, Florida. We ensure that you have a comfortable stay and find you the most comfortable and luxurious hotels in Florida. If you wish to reach us, fill out this form and someone from our team will contact you. We’re open from 8 am to 9 pm all seven days of the week. To make the most of your Everglades Airboat Tour, drop in early in the day and enjoy the entire day with Captain Randy. Whether you are coming with your kids, friends or partner, you will find something or the other of interest in Everglades. Just drop us an email at randy@ride-the-wind.com and let us take care of the rest!